The average age of menopause is 51. Approximately 42 million women in the U.S. are menopausal. Because ours is an aging population, each year a higher percentage of the population is menopausal. Approximately 4900 U.S. women enter menopause each day. The age of menopause is not influenced by socioeconomic factors and has been relatively constant. The average life expectancy for a woman in 1900 was 48 years, now it is 79 years. 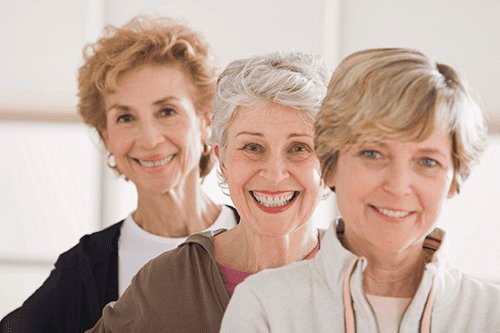 While life expectancy has increased, the age at menopause has remained constant. The increasing life span means that the average woman is menopausal for greater than one third of her life. The medical definition of menopause is for a woman to be menstruation free for twelve straight months. Menopausal symptoms often start prior to this because of fluctuating levels of estrogen. A better definition of menopause would be to have persistent symptoms of estrogen deficiency.

The most common symptoms of estrogen deficiency are hot flashes, vaginal dryness, and sleeping difficulties. Menopause occurs when there are fewer than 1000 follicles left in the ovaries. Follicle stimulating hormone (FSH) and estradiol levels are not reliable predictors of menopause, but persistently elevated FSH and low estradiol is suggestive of menopause. The hypothalamus sends gonadotropin releasing hormone (GnRH) to the pituitary gland, which then releases FSH to act on the ovary. In menopause the ovary becomes less capable of producing estrogen but the hypothalamus and pituitary gland are not aware of this. So they continue to make GnRH and FSH respectively, trying to tell the ovary that the body is lacking estrogen. This is why FSH is elevated in menopause. In early menopause, moderate estrogen production can still occur, keeping the FSH level low. If a practitioner is relying on only the FSH level, and not symptoms to diagnose menopause, the diagnosis will be missed.

The hypothalamus is the temperature-regulating organ. Because it is working in overdrive, releasing GnRH, hot flashes occur. In early menopause, estrogen fluctuations are still occurring, leading to more menopausal symptoms. Later in menopause, the symptoms can disappear, and women consider themselves to be post-menopausal. There is no such thing as being post-menopausal; one is menopausal for life. Smokers reach menopause on average two years earlier than nonsmokers. Symptoms of menopause are hot flashes, night sweats, sleeping problems, vaginal dryness, mood swings, and memory loss. Hormone replacement therapy (HRT) can alleviate these symptoms, and Bioidentical Hormone Replacement Therapy is most likely the safest form of treatment. Only 10% of women have abrupt cessation of menstruation with no menopause related symptoms. There is a 30% drop in estrogen by age 50, with a sharp decline after menopause. There is 75% loss of progesterone between 35-50, and progesterone is almost nonexistent after menopause. Today, fewer than 30% of menopausal women are on HRT.

SAMe (S-Adenosylmethionine) is a combined product of ATP and methionine. It is not a vitamin because the body produces...

Unfortunately stress is a big part of a women’s life and it can have negative effects on health. Like depression,...

Lack of sleep can affect your health, just like lack of exercise and unhealthy eating. The body rejuvenates, repairs...